JavaScript is not enabled! Please enable Javascript to use this site.

My name is Asha Kirkby. I am an expert inline skating instructor and my series of online courses is a result of my 18 years full-time teaching experience.

I found my first pair of skates (rainbow quads) on the street in a rubbish bin aged 10. They fitted perfectly. I skated home, almost falling on the curb descent before quickly discovering that bent knees worked much better. Soon after I went to a roller disco and was “discovered” by my future artistic skating coach and began figure skating on quads. Two years later I won the British under 13 National Championships. I competed throughout my teens, representing Great Britain in several international competitions.

I gave up competitive skating at 18 and went to Brazil on a gap year before starting university in Edinburgh. In my 20s I had a few office jobs in London but was very unhappy. I left work for what I thought was a temporary few months off to rest and regroup. In that time I bought a pair of rollerblades and started skating for fun and fitness. A skating friend suggested we do the ICP (Inline Certification Program) to become instructors. 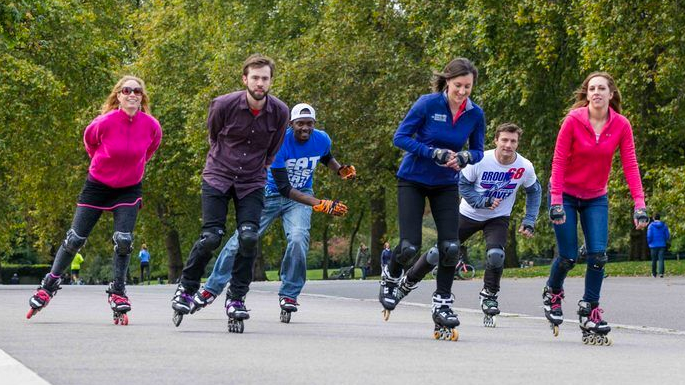 We started Skatefresh together in 2000 and that's how my teaching career started. I love teaching. I'm fascinated by people's learning process and how I can make that more efficient, practical and satisfying.

I spend most of my time in the UK and Europe during the spring and summer months and the winters in Brazil. I teach group classes and workshops as well as private lessons and online video coaching wherever I am and I frequently travel to other countries for Instructor Certifications. I’ve been certifying Instructors for ICP since 2002 and I’ve certified more than 300 instructors in the UK, Spain and Brazil as I also speak Spanish and Portuguese.

Until June 2019 I am on a “World Teaching Tour” which includes Dubai, Singapore, Australia, Argentina, Brazil, Peru, Mexico and USA.

I’ve worked for the BBC and Disney as a skate consultant, judge and coach. For Disney I trained the main actors in “Soy Luna”. This included a 2 week intensive boot camp and ongoing video coaching for a year. They went from zero to experts and then started filming.

Skatefresh began before I even had a mobile phone and before the internet was readily available.  Once online I began to be inundated with questions from skaters all over the world needing help and advice.

I wanted to make a series of video trainings that would be as similar to my class content as possible, providing skaters with the exact progression sequences that I’ve developed over 18 years of teaching. I think it’s my sequences of drills that hold the secrets to learning in a safe and progressive way while reducing the risks and increasing the fun.

I have online students who have told me they overcame depression, back pain, weight issues, Asperger’s, loneliness and other conditions through taking up skating. Others have met their partners or found a whole new circle of friends as a surprise bonus of skating.

Nothing makes me happier than observing and sharing in these successes. When one person heals something, we all benefit.

which level am i?

thanks! your level is